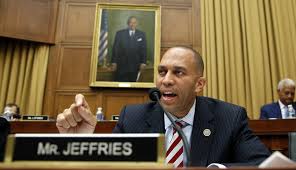 Sometimes blowing away the noise and residual dust is a necessary act of Catharsis for all.   Please listen to everything Hakeem has to say about the “Witch Hunt” before you close your ears and mind to the facts.   Those that have suffered long on the wrong side of a changing World economy and disloyal politicians can easily fall prey to a master manipulator. It is understandable and very disheartening when the truth comes out about someone you trusted to lead you out of your misery and failed circumstance.   Yet the truth eventually comes out.

U.S. Representative Hakeem Jeffries details the corruption and criminality of Trump’s 2016 presidential campaign already discovered by the FBI as a rebuke to Trump’s claims that Robert Mueller is leading a witch hunt.

Hakeem Sekou Jeffries /ˌhɑːˈkiːm/ (born August 4, 1970) is a Democratic member of the U.S. House of Representatives, representing New York’s 8th congressional district in Brooklyn and Queens. Prior to taking office in 2013, he was a corporate lawyer for Paul, Weiss, Rifkind, Wharton & Garrison, then Viacom and CBS, before running for and serving in the New York State Assembly from 2007 to 2012, representing the 57th Assembly district.