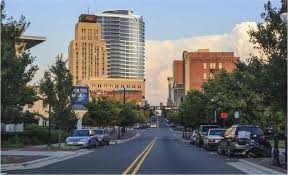 This is a re post of a 2015 article due to interest in the historic Hill Building /CCB legacy and formation of the 21C museum Hotel in Durham, NC.

PRESS RELEASE – 21c Museum Hotels announces the opening of its fourth property in downtown Durham (111 N. Corcoran Street; 919.956.6700). 21c Durham is an adaptive reuse of the Hill Building, one of the city’s most iconic structures originally built in 1937. Bringing new life to the building, the property mixes contemporary design with historic Art Deco details and offers 10,500 square feet of contemporary art exhibition space open free of charge to the public, a 125-room boutique hotel and Counting House restaurant.

“Downtown Durham is energized with art, culture, education and a dining scene that has been recognized as one of the best in the South,” said Steve Wilson, CEO and Founder of 21c Museum Hotels. “21c Museum Hotels is about contemporary art, warm hospitality, local food, and community. We strive to build not just great places to eat, drink and spend the night, but cultural centers that help reinvigorate urban areas. The revitalization efforts underway in Durham have produced amazing results and we aim to enhance those efforts as we open today and to offer an additional resource for art, social engagement and civic conversations.”

Art at 21c
Contemporary art is at the heart of the 21c experience. The company was founded by Laura Lee Brown and Steve Wilson, contemporary art collectors and preservationists who believe in the power of innovative and thought-provoking art to transform communities. 21c Durham presents rotating solo and group exhibitions, site-specific installations and a full roster of cultural programming curated by Museum Director Alice Gray Stites.

The property features seven permanent site-specific installations integrated into a variety of spaces around and within the building. Collectively titled Reflecting Transformation, these works reference nature, technology, economics, politics and entertainment to illuminate the evolution of the past into a future-focused present. Works include Duke Riley’s It Will Warm You Twice, a large-scale mosaic made of cigarettes and mini cigars that references the ubiquitous role that tobacco has played in the development and history of Durham, as well as the decline of its influence. Other artists featured are Andrew Erdos, Astrid Krogh, Ned Kahn, Claire Shegog, FUTURERETRIEVAL (Katie Parker and Guy Michael Davis) and Leslie Lyons and JB Wilson.

The historic Hill Building on Corcoran and Main Street, which housed the former CCB and SunTrust Bank is under construction by:

Like its sister properties, 21c Durham will be woven into the fabric of downtown, welcoming both visitors and members of the community to experience its rotating exhibitions, participate in its programs and enjoy its culinary offerings.

Also within the Hotel is the Counting House Restaurant.  We are excited to finally announce our restaurant that will be located at the new 21c Museum Hotel Durham, opening early 2015! Read more about our executive chef Josh Munchel and details for the restaurant below.

Amanda Jones Hoyle
Staff Writer-
Triangle Business Journal
Email | Twitter
Construction crews today started moving in equipment to begin the renovation and restoration of the former SunTrust Building in downtown Durham, a 17-story tower that is being converted into a boutique hotel and art gallery.

The property, which is expected to reopen in 2015, will also have its own restaurant and bar.
The $48 million project is expected to create 200 construction jobs and 150 new permanent jobs, says Stephanie Greene, a spokeswoman for 21c Museum Hotels.
21c Museum Hotels purchased the building from Greenfire Development in Durham for $5.25 million using part of a $9 million loan from the Self-Help Credit Union in Durham, according to Durham County deed records. Self-Help had contributed funds from one of its New Markets Tax Credit program funds, which are used to help borrowers finance the purchase, construction and renovation of real property in low-income communities.
The Durham City Council approved in August a $5.7 million incentive, and the Durham County Board of Commissioners pitched in another $2 million to support the construction project. The city’s incentive is payable over 20 years and requires 21c to comply with construction start and finish deadlines.