NC Central University Originally named the National Religious Training School and Chautauqua for the Colored Race, NCCU was founded by Dr. James E. Shepard, a pharmacist religious educator. The institution was chartered in 1909 and opened its doors to students in 1910. In the following years, the school’s name became the National Training School in 1915, Durham State Normal School in 1923, North Carolina College for Negroes in 1925 (when it became the nation’s first state-supported liberal arts college for African-American students), North Carolina College at Durham in 1947, and finally North Carolina Central University in 1969. NCCU has been a constituent institution of the University of North Carolina System since 1972.

North Carolina Central University was founded in 1909 as the National Religious Training School and Chautauqua by Dr. James Edward Shepard. It became the first public liberal arts institution for African Americans in the nation. The University is now a master’s comprehensive institution that offers bachelors and master’s degrees, a Juris Doctor, and a Ph.D. in Integrated Biosciences to a diverse student population

North Carolina Central University, with a strong tradition of teaching, research, and service, prepares students to become global leaders and practitioners who transform communities. Through a nationally recognized law school, highly acclaimed and innovative programs in the visual and performing arts, sciences, business, humanities, and education programs, NCCU students are engaged problem solvers. Located in the Research Triangle, the University advances research in the biotechnological, biomedical, informational, computational, behavioral, social, and health sciences. Our students enhance the quality of life of citizens and the economic development of North Carolina, the nation, and the world.

For more than 100 years, the university has educated the citizens of North Carolina, the United States the world.
Washington Monthly ranks NCCU in the top 40 in the nation for contributions to the public good.

NCCU is the first school in the University of North Carolina system to offer the bachelor’s degree in Jazz Studies and has also developed a master of music in Jazz Studies in performance and composition.
The University has two state-of-the-art biotechnology research facilities, the Julius L. Chambers Biomedical/Biotechnology Research Institute (BBRI), and, The Golden Leaf Foundation Biomanufacturing Research Institute and Technology Enterprise (BRITE), which collaborate with pharmacy and biotech companies in nearby Research Triangle Park.
The NCCU Art Museum houses one of North Carolina’s leading collections of works by African-American artists and by others dealing with the black experience
U.S. News and World Report ranked NCCU School of Law as one of the 10 most popular law schools. National Jurist magazine ranked the law school as one of the top clinical opportunity programs and one of the most diverse.
NCCU is the second HBCU in the country to develop an LGBTA (Lesbian, Gay, Bisexual, Transgender Ally) Center.
The School of Library and Information Sciences is one of the five most diverse programs in Library and Information Sciences in the nation and the only program of its type at a historically black college or university. It is one of only 14 programs in the nation offering a Joint degree with the School of Law, Juris Doctorate (JD) and a Master’s in Library Science (JD/MLS) and produces more African-American librarians than all the other Library and Information Sciences programs combined.
NCCU was the first school within the UNC system to require all students to volunteer in the community as part of their education. NCCU students give 120 hours of service before they graduate. Last year students gave more than 200,000 hours of service, valued at nearly $3 million.
The Institute for Homeland Security and Workforce Development is a leading trainer in emergency preparedness; targeting rural communities, faith communities and low-income, low wealth communities.
The NCCU Men’s Basketball team won the 2014 MEAC Basketball Tournament Championship and earned the university’s first trip to the NCAA Tournament. 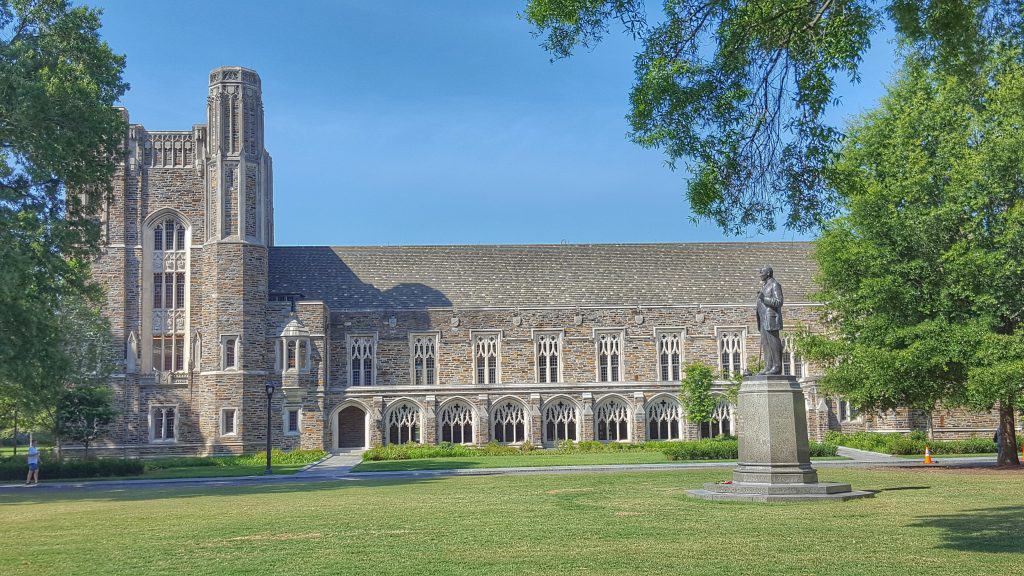 Duke University Home of the Blue Devils, Duke University has about 13,000 undergraduate and graduate students and a world-class faculty helping to expand the frontiers of knowledge. The university has a strong commitment to applying knowledge in service to society, both near its North Carolina campus and around the world.

Here is the list of Coursera partners (180 partners·across 27 countries·offering 3,221 courses

Here is the list of Coursera partners (180 partners·across 27 countries·offering 3,221 courses

Durham School of the Arts