Eno’s impact on Bryan Ferry, U2, and Roxy Music Roxy Music with Brian Eno and Bryan Ferry up front

You know there’s no way that we can write about Everything but the Girl without posting also on the subject of Bryan Ferry and Roxy Music.

Consider first the degrees of separation between Bryan Ferry and Bono? It’s only 1° of separation really and that’s Brian Eno, the estimable producer of most of Roxy music’s discography and a good deal of early U2.

Eno is an additional band member of every group he produces.  In Roxy Music, Brian Eno was one of the founding members. ENO’s synth layered, the ethereal sound is unmistakable.  One recognizes it straight away.   The Talking Heads also utilized Eno in their first couple of releases.

I was introduced to Roxy Music by my Senior year HS girlfriend, who was much more plugged into the goth and new wave music scene than I was. Here is the first track I heard from Roxy with Bauhaus vocal by none other than Bryan Ferry.  I will not admit to fashioning my wardrobe after Mr. Ferry but will admit to being better dressed than most if not all of my cohorts after this early exposure to Roxy Music.

Much later, video of More than this 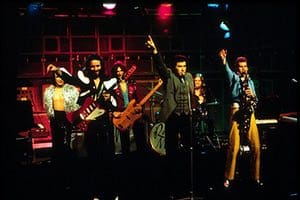 Bryan Ferry – Don’t Stop The Dance, Roxy Music & Bryan Ferry, album More Than This (The Best of Bryan Ferry and Roxy Music), 1995 Bryan Ferry initially found music success with the group Roxy Music. Formed in 1970, Ferry fronted the band which he co-founded and went on to achieve 10 UK top 10 hit singles and 11 UK top 10 albums (of which 4 were UK Number 1s). 1973 saw Bryan Ferry launch the beginnings of his solo career alongside Roxy Music’s group projects. From this time up until the present day, he has continued to go from strength to strength, achieving great success with his solo endeavors as well as with Roxy Music. Described as “one of the most innovative and distinctive singers and lyricists to emerge in popular music” Ferry’s sophisticated, elegant and glamorous on-stage persona has won him fans around the world. His vocal genius is said to lie in his peerless ability to merge musical styles “from french chanson, through to classical crooner to hard-edged rock.” Imprinting his own style into his recordings and performances successfully is reflected in his recognition as a highly successful solo artist in his own right; he has achieved great success with 5 top 10 UK chart singles as well as 10 UK chart top 10 albums (including the Number 1s “Boys and Girls” (1985) and “Street Life,” (1986). Ferry has also won critical acclaim, most notably, his 2001 Grammy Nomination for Best Traditional Pop Vocal Album for 1999’s “As Time Goes By”. Notes* For this video editing I used video materials from the following sources:

British musician, composer, and record producer, Brian Eno connects with Zane Lowe to break down his latest studio album, ‘FOREVERANDEVERNOMORE’. In a wide-ranging conversation, Eno describes the changes he’s seen in the music industry since his career began decades ago. Brian also talks about his friendship with Fred again.. and how much they have learned from each other. The discussion closes with a talk about Spatial Audio, what the development means, and how Eno views the intersection of music and technology. Listen to Brian Eno on Apple Music: https://apple.co/BrianEnoYT