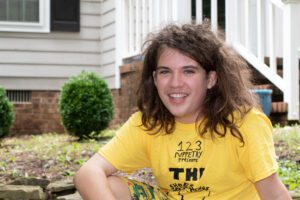 After becoming interested in puppetry at age three, Sol Ramirez founded 123 Puppetry while still in elementary school. Puppetry includes a much greater variety of form than the classic sock puppet. Explains Sol, “Anything with movement can be considered a puppet.” Sol has also been a “full-on member” of the well-known Paperhand Puppet Intervention theater company for three years.

Now fifteen and a high school freshman, Sol recently became the youngest recipient of an Orange County Arts Commission grant. The grant will help pay for supplies, venue rental, advertising, and U-hauls. Sol wrote the grant application, his first, with less than a week remaining before the deadline. “I hadn’t really fully written out all the stages of what I’ve done before…it was fun.”

Such an attitude is characteristic of Sol, who views the many challenges of puppetry as a sign that he is “doing something right,” especially when he is working through some of the same challenges he has seen Paperhand face. 123’s most recent show, “The Shoestrings of Us,” centered around finding similarities in who we are in both good and bad ways. All of 123 Puppetry’s shows have a social justice theme. “What really draws me into it is focusing on different social and environmental aspects that might be cool to have older people or younger kids get a taste of from a teenager’s perspective. Something I’m naturally drawn to is really just kind of a rebellious systematic fighting of poverty and any social wrong.” The show he is currently writing for next year will use the theme of light and how its presence (or lack thereof) can conceal or reveal different truths.

Sol plans to continue with puppetry as long as he can; he is hoping to find other high school students who are interested. “I love art, I love puppets, I love theater, I love music – it’s something that I’m able to bring all together.” Sol primarily works alone year round preparing a show until practice starts. At that point he becomes the leader of a team effort with many moving parts. He has learned, “It is best to be able to lead people by hearing all their ideas. It helps me as a leader to be able to rely on the people I have around me.” As he starts the school year, he is most excited (and simultaneously most nervous) “about meeting new people and meeting new challenges.”