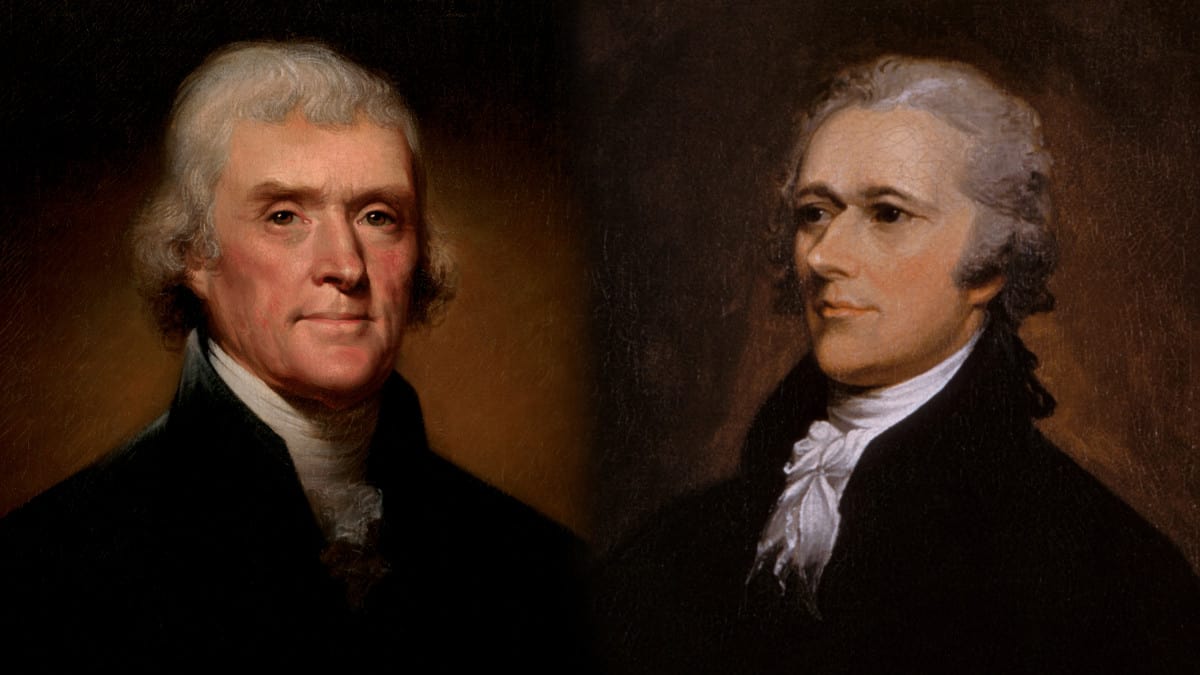 A central difference between Hamilton and Jefferson is discussed at a reception table for Jefferson upon his return as Ambassador to France. John Adams: Part 5: Unite or Die 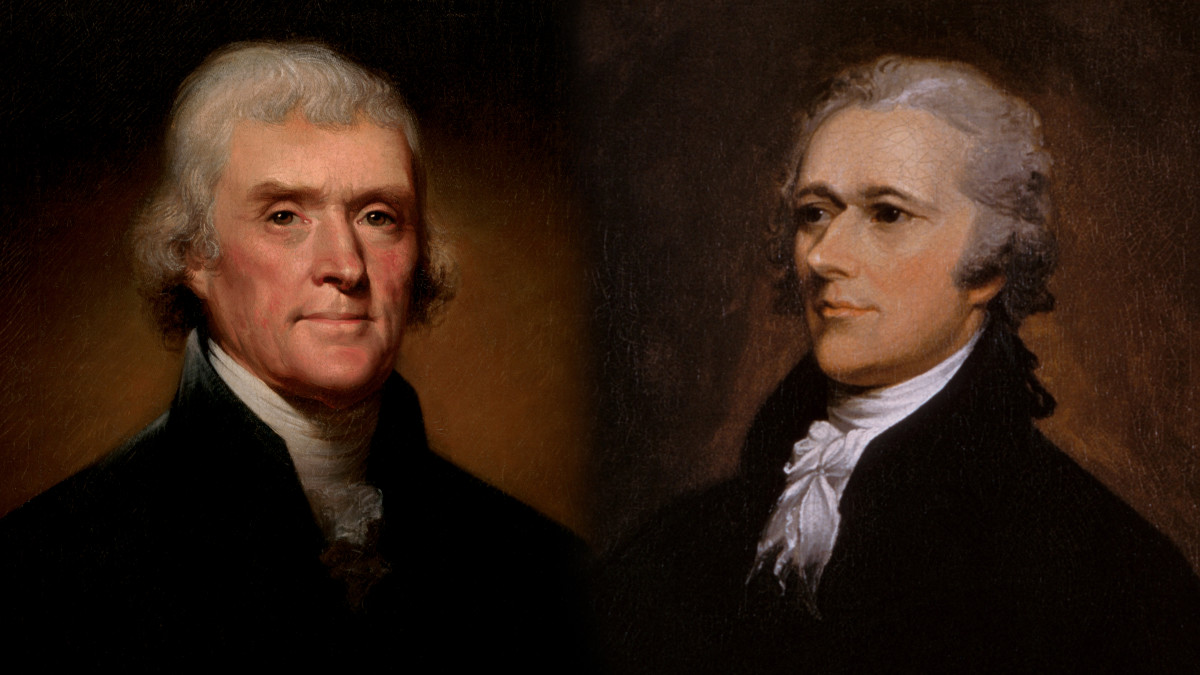 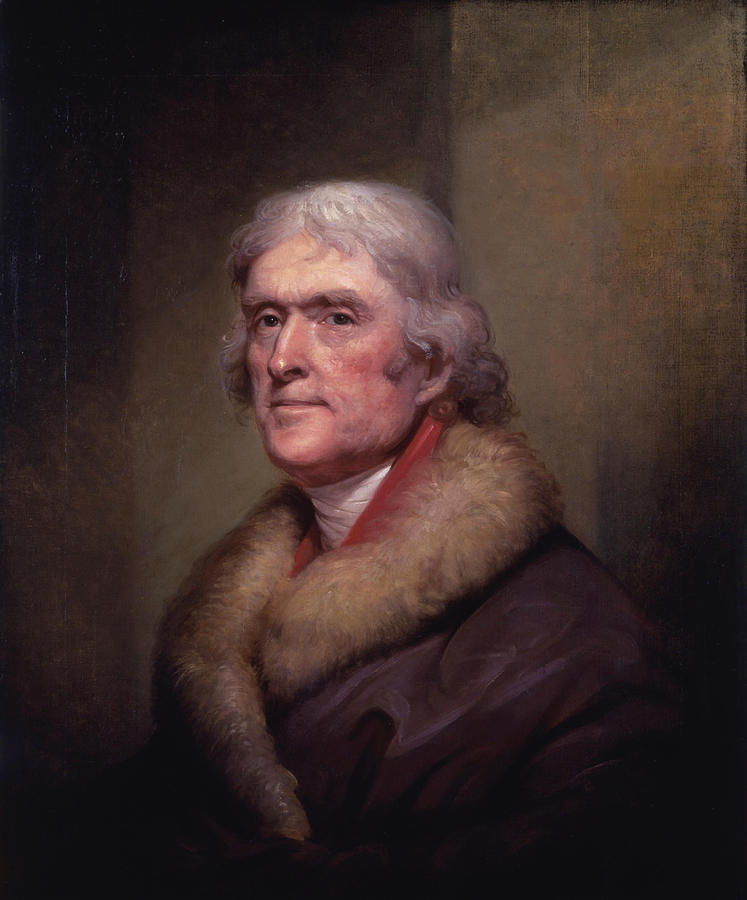 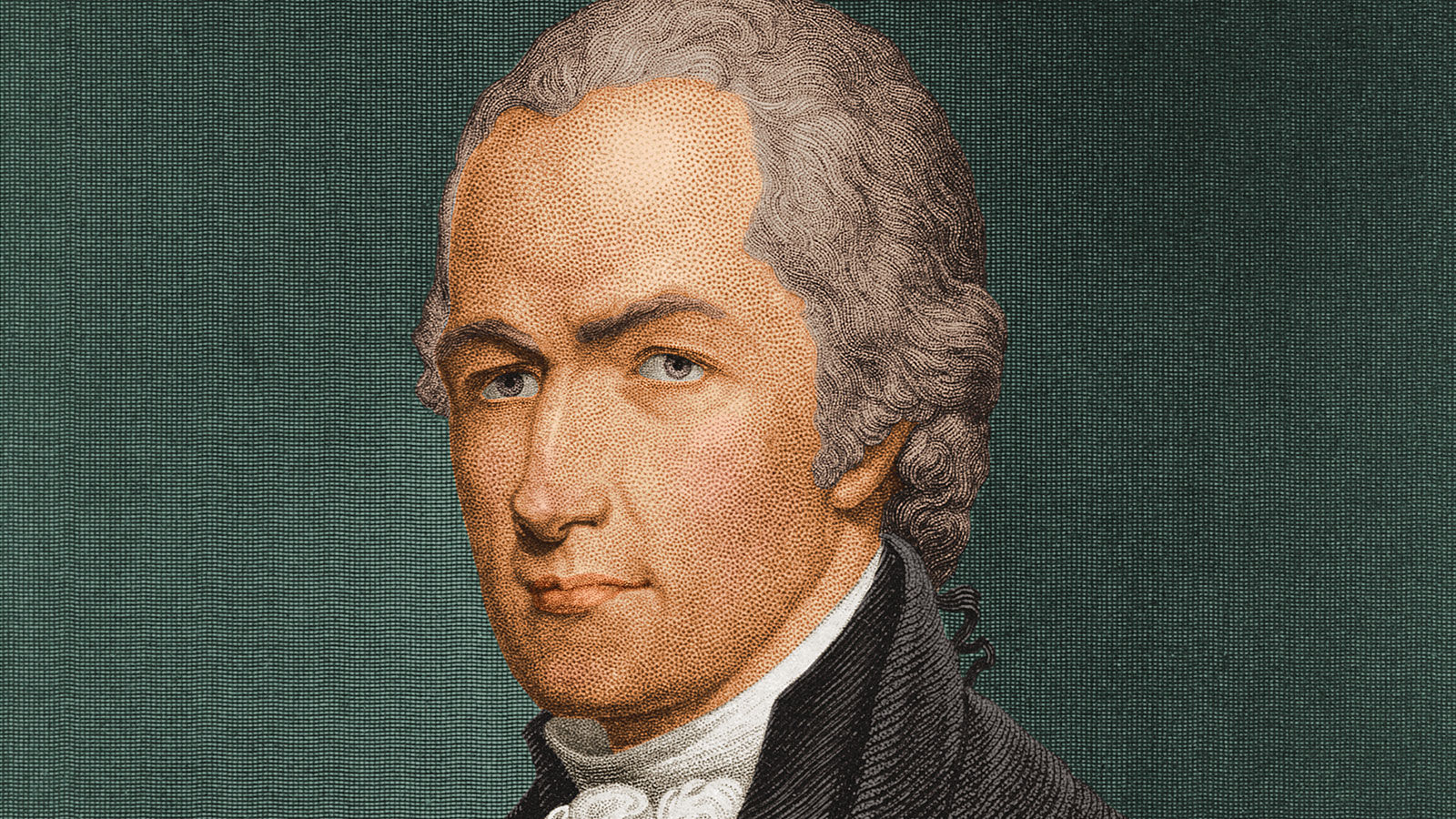 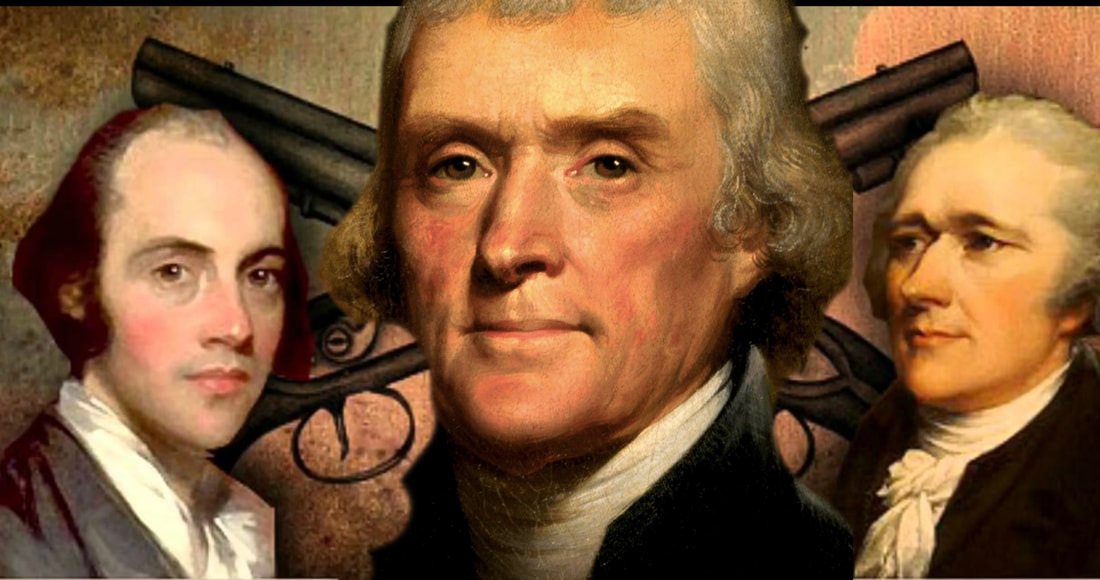 This is a brief introduction to the conflicts between Thomas Jefferson and Alexander Hamilton during the Washington Administration that led to the formation of the first two party system in the United States. This lecture is intended for AP US History (APUSH) students but may be helpful to students of government and politics, as well.

Learn more about the American founding father John Adams and his portrayal in the HBO Films’ Miniseries Event ‘John Adams.

How historically accurate is the Musical Hamilton? We know that Miranda made a valiant effort for accuracy yet?

The “Hamilton” Broadway musical Uber hit of the 21st Century may leave one with the impression that Hamilton was well-loved during his historical time.  What is clear from contemporaries and contemporaneous writings for Hamilton’s period is that Hamilton and Adams/Jefferson had distinct differences in the constitution and future direction of these United States of America.  One broad distinction  between Hamilton and Jefferson comes down to their respective view on generational U.S. debt.   Hamilton clearly comes to the conclusion that we needed a National Bank (see the Fed) that could borrow from other Nations (see Great Britain and the Netherlands) and Jefferson concluded that we should not leave our heirs (children/grandchildren, et al) debts from our generation’s national expenditures. Jefferson also had a concern about about the national Treasury concentrating power in the Northeast with the money powers in Massachusetts.

Whose Vision of America Won Out—Hamilton’s or Jefferson’s?

“We live, without question, in Hamilton’s America,” says Stephen F. Knott, professor of national security affairs at the United States Naval War College and co-author of “Washington and Hamilton: The Alliance That Forged America.”

“Hamilton had the foresight to see the United States emerging as an economic and military power that would surpass Great Britain and the other European powers. All of Hamilton’s policies as treasury secretary and as President Washington’s closest advisor were designed to convince his fellow Americans to, as Hamilton put it, ‘think continentally.’ He wanted the citizenry to think of themselves first and foremost as Americans—not New Yorkers or Virginians.

“Hamilton became the nation’s first treasury secretary at a time when the citizens of South Carolina and New Hampshire had about as much in common with one another as they did with someone from Tasmania. Hamilton succeeded in creating an American sense of identity in part by creating institutions that would bind the people to the national government, not their respective states, such as the national bank and the assumption by the national government of the state debts from the Revolutionary War.”

Knott tells HISTORY that without Hamilton’s contributions, it would have been next to impossible for the United States to have emerged as a superpower during the 20th century. “Hamilton’s economic vision was contrary to that of Jefferson’s, and as such the United States might not have moved—or at least not moved as quickly—in the direction of becoming a manufacturing nation and the world’s largest economy by late in the 19th century,” he says.

“Hamilton was the father of American capitalism, which arguably produced one of the highest standards of living in the world,” Knott says. “His policies at the Treasury Department were designed to enhance the development of manufacturing. His economic policies such as a national bank, tariffs to protect American manufacturing, and the stabilization of the nation’s finances, which enabled the country to establish a good credit rating, all contributed to the overall rise of the United States as an economic superpower.”

Knott also notes that Hamilton was the driving force behind the publication of the Federalist Papers—writing 51 of the 85 essays while working in concert with James Madison and John Jay—that laid the theoretical blueprint for an “energetic executive,” a model followed closely by Washington.

“From the beginning to the end of this most important first presidency, Washington followed Hamilton’s advice, much to Thomas Jefferson’s distress,” he says. “Remove Hamilton from Washington’s cabinet, and you would have a number of very different precedents. Hamilton was determined to infuse as many elements of energy and permanence into a new national government under the Constitution that would allow the nation to defend itself from foreign attacks and domestic insurrections, and provide an environment conducive to economic development.”

Knott says that Hamilton’s vision of a United States in which its citizens thought “continentally” had ramifications when the country faced its greatest crisis during the Civil War. “The concept of union, of American nationhood, was embedded deeply enough in parts of the North that Union soldiers were prepared to die for that principle. It is no accident that Hamilton was a revered figure during the Gilded Age, seen by presidents such as James Garfield, Benjamin Harrison, and other Republicans as the most impressive Founding Father.”

“Jefferson is chiefly responsible for the disentanglement of government and religion and the general consensus at the time of the Revolution that the government would be republican and most of its office-holders elected,” Gutzman, a history professor at Western Connecticut State University, tells HISTORY. He points to republican principles championed by Jefferson such as local control of education, democratizing land holding, and decentralized government. In addition, he says the Louisiana Purchase orchestrated by Jefferson is the primary reason that America became a transcontinental country, which allowed it to eventually become an economic, military and diplomatic superpower.

Gutzman also points to the principles in the Virginia Statute for Religious Freedom that was drafted by Jefferson and widely copied by other states and incorporated into the U.S. Constitution by James Madison. “In England, you couldn’t attend Oxford or Cambridge or serve in Parliament if you weren’t Episcopalian. Jefferson thought that was wrong,” he says. “The Jefferson view is that the government can only pervert religion. The government can only impose on people’s consciences, so it shouldn’t be involved.”

Although Jefferson was himself a member of Virginia’s landed aristocracy, he spearheaded the dismantlement of its system of primogeniture and entail, which prevented landholders from dividing properties to future generations. “In colonial Virginia, 85 families owned about two-thirds of the land, and you can’t have a republic with 85 families owning most of the land,” Gutzman says. “With the change, instead of aristocratic land distribution, you had a free distribution from one generation to another and land highly divided. It’s an extremely republican ideal.”

Jefferson’s grave marker lists his founding of the University of Virginia, but not his time in the White House, as one of his primary achievements, and Gutzman says there’s a good reason for that. “People don’t even realize Jefferson is the man who conjured every university these days,” he says.

Jefferson advocated the power of state governments to such an extent that when Jefferson talked about his “country,” he was referring to Virginia, Gutzman says. “In general Jefferson thought that to have a republican society it had to be highly decentralized. It didn’t mean, though, that he thought it wasn’t necessary for the federal government to have all the necessary strength when it came to diplomatic and military matters.”

Gutzman argues that the debate over the competing visions of Jefferson and Hamilton was settled in the election of 1800. “In the 1790s Hamilton wanted to use the military to tamp down political dissent, and his party was responsible for the Sedition Act, which made it a crime to speak out against the government. I think that was the route America would have followed if not for the Republican success in the election of 1800. The victory meant that an aristocratic model of government was done. That was a lasting victory. Jefferson said the election of 1800 was as real a revolution of government principles as 1776 was in its form. The contest between the two was so lopsided that Hamilton’s party literally ceased to exist.” (1)

(1) Whose Vision of America Won Out—Hamilton’s or Jefferson’s?

Here is a PDF of the contrast and compare between Thomas Jefferson and Alexander Hamiton (including a Venn Diagram) which clearly diagrams the differences between Jefferson and Hamilton.

An Englishman sees an Englishman doing the most English thing he can do: be independent. This clip was discussed on GREENWOOD, a show I present on this channel. Exploring the heroic sagas, legends & lore that cultivate English Speaking civilization. Readings and analysis of great—and esoteric—English verse, narrative, prose, and speech to decipher their meaning and psychological value.