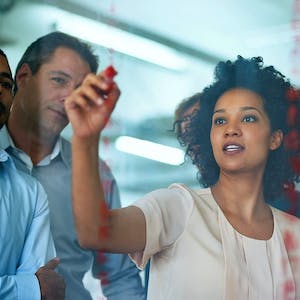 This course has been designed to help leaders, like you, learn how to effectively navigate the challenges of significant organizational disruptions. As a participant in this course, you’ll discover why an understanding of various stakeholder perspectives can inform and dramatically improve a leader’s response to events that threaten an organization’s very survival. This course is also about understanding and developing individual and organizational resilience—the ability to anticipate potential threats; to cope effectively with adverse events when they occur; and to adapt to changing conditions, ensuring a viable path forward for yourself, your team, and your organization. These topics are particularly relevant in the wake of the global COVID-19 pandemic. Many course examples will reference lessons leaders around the world have learned during this far-reaching healthcare crisis.

During the eight-course modules, which are distributed over four weeks, participants will explore topics such as: Why the VUCA world is making crises more common; Characteristics of resilient organizations and ways to increase resilience; Stakeholder value propositions and how these are threatened during a crisis; Organizing frameworks for estimating the types of crises an organization might encounter; the Unique and challenging nature of the crisis environment; the Fundamentals of crisis leadership; and Building a plan to prepare yourself, your team, and your organization for your next major crisis—which, in today’s world, is not so much an “if”, as a “when”. Professor Mike Barger, your faculty member for this course, has served as a TOPGUN instructor in the United States Navy and as a founder and executive at JetBlue Airways. His professional experience has helped him learn a great deal about crisis leadership and to gain a true sense of what it means to be resilient. Throughout the course, Professor Barger will draw upon many practical examples that will make the content of this course easy to appreciate, understand, and translate into practical lessons that you will be able to apply immediately at your organization. Crisis leadership is a topic that’s exciting, daunting, and almost impossible to master. With some time and effort over the four weeks of the course, however, you can develop an exceptional set of crisis-leadership tools that will serve you well throughout your professional career. Dr. Mike Barger is an Assistant Clinical Professor of Business Administration and Executive Director, Office of Strategy and Academic Innovation, at the Stephen M. Ross School of Business, University of Michigan. In his teaching role, Dr. Barger leads courses in crisis leadership and entrepreneurship. In his staff role, he facilitates the design and execution of the School’s strategic initiatives and oversees a large shared-services organization. Dr. Barger graduated from the University of Michigan in 1986. He then received his commission as an Officer in the United States Navy where he served for thirteen years, completing three, six-month deployments as a pilot and flight instructor flying the F/A-18 Hornet. While in the Navy, Mike spent his entire career in pilot education highlighted by a tour as a student, Instructor, and then Chief Instructor at the Navy Fighter Weapons School (TOPGUN). Throughout his naval career, he was a widely published author, speaker, and educator on combat strategy, training techniques (particularly in advanced simulation), and complex weapons systems employment. Dr. Barger left the US Navy in 1999 to be a founding member of JetBlue Airways. He created JetBlue University, the award-winning corporate training function that provides learning and development to all members of the JetBlue workforce (it remains the only single-source provider of company education in the airline industry worldwide). During his time at JetBlue, Mike also served as the senior pilot on both varieties of JetBlue aircraft (the Airbus 320 and Embraer 190); was the senior leader responsible for all Flight Operations, Maintenance Operations, Talent Management, and Enterprise Strategy; and led the company’s Emergency Command Center. Following his thirteen years at JetBlue, Dr. Barger served for six years as the Chief Operating Officer of CorpU, an education technology company based in Philadelphia, PA. As COO, he oversaw all CorpU operations including the design, creation, and delivery of all CorpU Academy courses–educational offerings built on the wisdom and insight of the brightest minds in academia and business. Dr. Barger has a deep passion for helping leaders solve their most complex business challenges with knowledge and tools that help them harness the collective genius already present in their organizations. In 2006, Mike helped create a doctoral program in Workplace Learning Leadership at the University of Pennsylvania, where he served as an Advisory Board member, Faculty member, and program participant. He received his Master’s Degree in Learning Leadership in 2008 and his Doctor of Education degree in 2009. Dr. Barger lives with his wife and children in Novi, Michigan, USA.