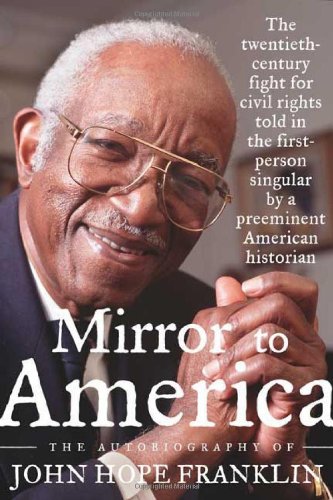 John Hope Franklin (January 2, 1915 – March 25, 2009) was an American historian of the United States and former president of Phi Beta Kappa, the Organization of American Historians, the American Historical Association, and the Southern Historical Association. Franklin is best known for his work From Slavery to Freedom, first published in 1947, and continually updated. More than three million copies have been sold. In 1995, he was awarded the Presidential Medal of Freedom, the nation’s highest civilian honor.

While teaching at Duke and after retiring from the same, Dr. John Hope Franklin could often be found at South Square Martin Luther King Jr. Harris Teeter shopping for his weekly groceries. The way he comported himself and treated everyone from the cashier to the young man or woman bagging groceries demonstrated his grace and humility. There was no evidence of anything other than his appreciation for all those in service around him. It was my honor to quietly identify who this great man was to the young men and women who worked and shopped in happy oblivion near Dr. Franklin. He made no effort to identify himself as anyone other than what he was to anyone who watched him, a dignified gentleman shopping for his own groceries.

Dr. John Hope Franklin’s father Buck Colbert Franklin was a Civil Rights Lawyer aka “Amazing Buck Franklin” (1879–1960). He was of African and Choctaw heritage and was born in Pickens County, Oklahoma, then a part of the Chickasaw Nation Indian Territory. He was the 7th of ten children born to David and Milley Franklin. David was a former slave and Chickasaw Freedman. Milley was born free and was African and one-fourth Choctaw. Buck Franklin became a lawyer and is best known for defending survivors of the Tulsa Riots in 1921 which had resulted in the destruction of the Greenwood District, otherwise known as “Black Wall Street”, the wealthiest Black community in the United States at that time.

Career
“My challenge,” Franklin said, “was to weave into the fabric of American history enough of the presence of blacks so that the story of the United States could be told adequately and fairly.”

In his autobiography, Franklin described a series of formative incidents where he confronted racism while seeking to volunteer his services at the beginning of the Second World War. He attempted to respond to the Navy’s search for qualified clerical workers, but after he presented his extensive qualifications, the Navy recruiter told him that he was the wrong color for the position. He was similarly unsuccessful in finding a position with a War Department historical project. When he went to have a blood test as required for the draft, the doctor initially refused to allow him into his office. Afterward, Franklin took steps to avoid the draft, on the basis that the country did not respect him or have an interest in his well-being, because of his color.

In the early 1950s, Franklin served on the NAACP Legal Defense Fund team led by Thurgood Marshall, which helped develop the sociological case for Brown v. Board of Education. This led to the 1954 United States Supreme Court decision ending the legal segregation of black and white children in public schools.

Professor and researcher
Franklin’s teaching career began at Fisk University. During WWII, he taught at St. Augustine’s College from 1939 to 1943 and the North Carolina College for Negroes, currently North Carolina Central University from 1943 to 1947.

From 1947 to 1956, he taught at Howard University. In 1956, Franklin was selected to chair the history department at Brooklyn College, the first person of color to head a major history department. Franklin served there until 1964, when he was recruited by the University of Chicago. He spent 1962 as a visiting professor at the University of Cambridge, holding the Professorship of American History and Institutions.

David Levering Lewis, who has won the Pulitzer Prize for history, said that while he was deciding to become a historian, news came that Franklin, his mentor, had been named departmental chairman at Brooklyn College.

“Now that certainly is a distinction. It had never happened before that a person of color had chaired a major history department. That meant a lot to me. If I had doubt about (the) viability of a career in history, that example certainly helped put to rest such concerns.”

In researching his prize-winning biography of W. E. B. Du Bois, Lewis said he became aware of Franklin’s

“courage during that period in the 1950s when Du Bois became an un-person, when many progressives were tarred and feathered with the brush of subversion. John Hope Franklin was a rock; he was loyal to his friends. In the case of W. E. B. Du Bois, Franklin spoke out in his defense, not (about) Du Bois’s communism, but of the right of an intellectual to express ideas that were not popular. I find that admirable. It was a high risk to take and we may be heading again into a period when the free concourse of ideas in the academy will have a price put upon it. In the final years of an active teaching career, I will have John Hope Franklin’s example of high scholarship, great courage and civic activism.”

From 1964 through 1968, Franklin was a professor of history at the University of Chicago, and chair of the department from 1967 to 1970. He was named to the endowed position of John Matthews Manly Distinguished Service Professor, which he held from 1969 to 1982. He was appointed to the Fulbright Board of Foreign Scholarships, 1962–69, and was its chair from 1966 to 1969.

In 1976, the National Endowment for the Humanities selected Franklin for the Jefferson Lecture, the U.S. federal government’s highest honor for achievement in the humanities. Franklin’s three-part lecture became the basis for his book Racial Equality in America.

Franklin was appointed to the U.S. Delegation to the UNESCO General Conference, Belgrade (1980).

In 1983, Franklin was appointed the James B. Duke Professor of History at Duke University. In 1985, he took emeritus status from this position. During this same year he helped to establish the Durham Literacy Center and served on its Board until his death in 2009.

Franklin was also Professor of Legal History at the Duke University Law School from 1985 to 1992.

Racial Equality in America
Racial Equality in America is the published lecture series that Franklin presented in 1976 for the Jefferson Lecture sponsored by the National Endowment for Humanities. The book divides into three lectures, given in 3 different cities, chronicling the history of race in the United States from revolutionary times to 1976. These lectures explore the differences between some of the beliefs related to race with the reality documented in various historical and government texts as well as data gathered from census, property, and literary sources. The first lecture is titled “The Dream Deferred” and discusses the period from the revolution to 1820. The second lecture is titled “The Old Order Changeth Not” and discusses the rest of the 19th century. The third lecture is titled “Equality Indivisible” and discusses the 20th century.

Later life and death
In 2005, at the age of 90, Franklin published and lectured on his new autobiography, Mirror to America: The Autobiography of John Hope Franklin. Mirror to America received the Robert F. Kennedy Center for Justice and Human Rights 2011 Book award given annually to a novelist who “most faithfully and forcefully reflects Robert Kennedy’s purposes – his concern for the poor and the powerless, his struggle for honest and even-handed justice, his conviction that a decent society must assure all young people a fair chance, and his faith that a free democracy can act to remedy disparities of power and opportunity.”

In 2006, he received the John W. Kluge Prize and as the recipient lectured on the successes and failures of race relations in America in Where do We Go from Here? In 2008, Franklin endorsed presidential candidate Barack Obama.

Franklin died at Duke University Medical Center on the morning of March 25, 2009.

Frankin was elected as a foundation member of Fisk’s new chapter of Phi Beta Kappa in 1953, when Fisk became the first historically black college to have a chapter of the honor society. In 1973-76, he served as President of the United Chapters of Phi Beta Kappa.
Additionally, Franklin was appointed to serve on national commissions, including the National Council on the Humanities, the President’s Advisory Commission on Ambassadorial Appointments, and One America: The President’s Initiative on Race.

Franklin was a member of Alpha Phi Alpha fraternity. He was an early beneficiary of the fraternity’s Foundation Publishers, which provides financial support and fellowship for writers addressing African-American issues.

In 1962 honored as an outstanding historian, Franklin became the first black member of the exclusive Cosmos Club in Washington, D.C.

The John Hope Franklin Research Center for African and African American History and Culture resides at Duke University’s David M. Rubenstein Rare Book & Manuscript Library and contains his personal and professional papers. The archive is one of three academic units named after Franklin at Duke. The others are the John Hope Franklin Center for Interdisciplinary and International Studies, which opened in February 2001 and the Franklin Humanities Institute. Franklin had previously rejected Duke’s offer to name a center for African-American Studies after him, saying that he was a historian of America and the world, too.

In 1978, he was inducted into the Oklahoma Hall of Fame.

In 1994, the Society of American Historians (founded by Allan Nevins and other historians to encourage literary distinction in the writing of history) awarded Franklin its Bruce Catton Prize for Lifetime Achievement.

In 1995, he was awarded the Spingarn Medal from the NAACP.

In 1995, Franklin was awarded the Presidential Medal of Freedom, the nation’s highest civilian honor.

In 1995, he received the Chicago History Museum “Making History Award” for Distinction in Historical Scholarship.

In 1997, Franklin was selected to receive the Peggy V. Helmerich Distinguished Author Award, a career literary award given annually by the Tulsa Library Trust. Franklin was the first (and so far only) native Oklahoman to receive the award. During his visit to Tulsa to accept the award, Franklin made several appearances to speak about his childhood experiences with racial segregation, as well as his father’s experiences as a lawyer in the aftermath of the 1921 Tulsa race riot.

On May 20, 2006, Franklin was awarded the honorary degree of Doctor of Humane Letters at Lafayette College’s 171st Commencement Exercises.

On November 15, 2006, John Hope Franklin was announced as the third recipient of the John W. Kluge Prize for lifetime achievement in the study of humanity. He shared the prize with Yu Ying-shih.

Personal life
According to a DNA analysis, Franklin was descended mainly from people of Sierra Leone. Marriage and family
Franklin met and courted Aurelia Whittington at Fisk. They married on June 11, 1940 at her parents’ home in Goldsboro, North Carolina. Their only child, John Whittington Franklin, was born August 24, 1952. Aurelia was a librarian. Their marriage lasted 59 years, until January 27, 1999, when she succumbed to a long illness.