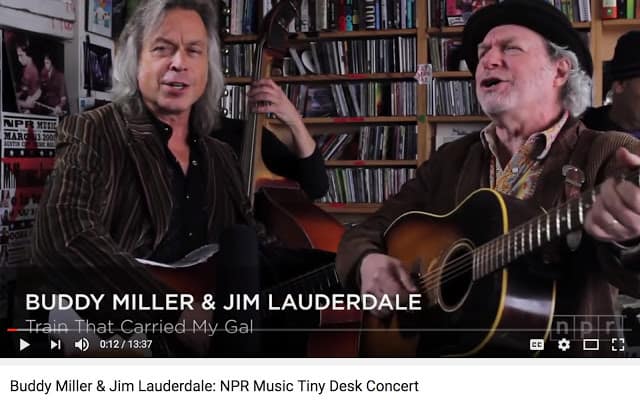 There’s something endearing, old-timey, and almost vaudevillian about Buddy Miller and Jim Lauderdale — even the way they bill themselves as “Buddy and Jim.” Both veteran musicians are in love with country music in all its many forms and influences; their music incorporates the blues and bluegrass, rock ‘n’ roll, and a good deal of craft.

Buddy Miller is the guitar player to hire if you’re playing heartfelt, not-so-shiny country-rock songs. Ask Robert Plant and Alison Krauss, with whom Miller toured for their Raising Sand tour, or Emmylou Harris, Shawn Colvin, and Patty Griffin, who named their tour together “Three Girls and Their Buddy.”

Jim Lauderdale writes award-winning country songs — hits for George Strait, Patty Loveless, and the Dixie Chicks. He’ll once again host the Americana Music Awards alongside Miller, with whom he shares a radio show on Sirius XM’s Outlaw Country Channel; that’s where the corny humor comes in. You’ll hear some of that in this Tiny Desk Concert, but you’ll also hear musical merrymaking and timeless harmonies, with songs from their first full-album collaboration, Buddy and Jim.

The songs they performed, at NPR’s offices and on the album, have titles like “I Lost My Job [insert pregnant pause here] of Loving You.” Some good fun to be had at the expense of heartbreak and life’s loves, both lost and found. –BOB BOILEN