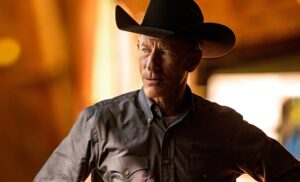 Photographer George Kamper’s latest work inspires nostalgia of the Old West. Equestrian Quarterly asked George to shoot the supplementary images to an article on singer Lyle Lovett titled “Lyle Lovett, the Renaissance Cowboy of Texas.” George also received the title of Photography Director on the magazine masthead. Here is what George had to say about the experience:

“I photographed Lyle for the Equestrian Quarterly cover and feature story in Katy, Texas. He was very gracious, warm and friendly. Lyle was competing in a “Reining” tournament so we would have to catch him between his rides to interview and do the shoot. I shot with available light and reflectors, taking time to source a few choice spots where I thought the light and backgrounds would be flattering and interesting. We ended up with several looks and had some great shots for the cover and feature.”