boygenius perform “Me & My Dog” from their self-titled EP, live in The Current studio. Phoebe Bridgers – Scott Street an exclusive live performance for Vevo DSCVR, the channel for the best in new music. It’s a real skill to wax forlorn without submitting to the depths of despair. In the last two years, Phoebe Bridgers has shown us just how articulate she can be regarding the troubled side of life while still touting the small joys that mark most day-to-day experiences. Again and again, the singer-songwriter revels in the marvels of the emotional deets that shape who we are. After critics erupted over the eloquence of the 23-year-old’s ‘Stranger In The Alps’ (get the ‘Lebowski’ reference?), the Silver Lake-based Bridgers went through a wave of Joni-Jackson comparisons. Elements of the masters dot her songs, but some of her more recent heroes is Sun Kil Moon’s Mark Kozelek and Elliot Smith – tender wordsmiths whose best work is both vulnerable and poised. If you know Bridgers’ “Smoke Signals” and “Motion Sickness,” you might’ve heard her “Scott Street” before, too. But not like this. Our DSCVR performance turns the tune, inspired by a sunset stroll through her Echo Park hood, into an epic lament. Swirling fiddle lines and cloudy guitar flourishes prove the singer knows exactly what she needs to bolster her designs as she closes with a farewell line of “don’t be a stranger.” Masterful.

A deeper Dive on all things Radiohead
Ready for Durham based Mount Moriah Band?

Songs:
Souvenir
Cowboy Take Me Away
Me & My Dog
Ketchum, ID

Trying to keep the analysis down to 3 words: Cathartic, Viking, and Resounding. We tried for brevity and arrived at Irish all the same. Hot damn. Some may need a cigarette, but those who don’t smoke cigarettes choose their relief and/or smudge with a sacred palo santo wood. Damn, this performance of this well-written song is great. The drummer felt it, too, as he kept his eyes closed. Phoebe’s backup vocals-yes, Julian’s lead thrashing guitar, Lucy’s restrained lead vocal, and the ancillary players from Phoebe’s band, drummer, and rhythm guitarist, Nashville-based songwriter Harrison Whitford (looks like Daniel Radcliffe). boygenius perform the song “Souvenir” from their self-titled EP, live in The Current studio. The song was prominently featured in ‘The Walking Dead’ Season 9 Episode 14 “Scars” I Know the End” by Phoebe Bridgers, out now on Dead Oceans.

Lyrics: Somewhere in Germany but I can’t place it Man I hate this part of Texas Close my eyes, fantasize Three clicks and I’m home When I get back I’ll lay around Then I’ll get up and lay back down Romanticize a quiet life There’s no place like my room But you had to go I know, I know, I know Like a wave that crashed and melted on the shore Not even the burnouts are out here anymore And you had to go I know, I know, I know Out in the park we watch the sunset Talking on a rusty swing set After a while you went quiet  And I got mean I’m always pushing you away from me But you come back with gravity And when I call you come home A bird in your teeth So I gotta go I know, I know, I know When the sirens sound you’ll hide under the floor But I’m not gonna go down in my hometown in a tornado I’m gonna chase it I know, I know, I know I gotta go now I know, I know, I know Driving out into the sun Let the ultraviolet cover me up Went looking for a creation myth Ended up with a pair of cracked lips Windows down scream along To some America First rap country song A slaughterhouse, an outlet mall Slot machines, fear of God Windows down, heater on Big bolt of lighting hanging low Over the coast everyone’s convinced It’s a government drone or an alien spaceship Either way we’re not alone I’ll find a new place to be from  A haunted house with a picket fence To float around and ghost my friends I’m not afraid to disappear The billboard said The End Is Near I turned around there was nothing there Yeah, I guess the end is here The end is here Follow Phoebe Bridgers: Shutdown/shut-in Spring gives us time to linger, at breakfast, over Oatmeal with cinnamon, organic Wegman’s blueberries, bananas, soy milk, and the May 25, 2020 issue of New Yorker. New Yorker magazine is like an old friend that waits for you, picking up the conversation on new/known people places and things. This morning we owe a credit once again to the much esteemed and worthy periodical. Thanks to the May 25 issue, we have Phoebe Bridgers on our new music Durham Cool plate.  Lyrically mature, vocally nuanced, and yes a perfect accompanist to teenage lust/angst.   Did I mention great hair and perfect features?  The best feature is of course, Phoebe’s brilliant mind.

Listened to, I know the End, on a short drive home from a State Park hike the Sunday after Thanksgiving. I was arrested on the spot. Unable to go inside after she strummed the first chord and sang the opening lyric. Is there anyone else contemporaneously writing such damn good lyrics today? Very subtle rhyming lines aside no one more deadpan good than Phoebe Bridgers when she taps the muse right in the marrow.

Quite a bit of chatter about the Phoebe Quarantine PJ wardrobe consistency. Most likely Occum’s razor tells us to land on songs cut in one day or she has a few pair of the same pajamas. Who is not guilty of wearing the same pajamas one day to the next.

Motion Sickness from Stranger In The Alps out Sep 22 on Dead Oceans. 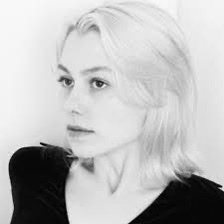 This Paste Studio session is sonically beautiful. First credit goes to Phoebe’s angelic tone, second to the sound engineer. This is the session that made me a fan. Dressed Manhattan lite in her Doc Martens and black dress with her Harrison, Harry Potter slide guitarist accompanist. Nicely done all around. 2015  7″ release produced by Ryan Adams  to now the artist is evolving but so far remaining faithful to pure.

Summary: Los Angeles singer/songwriter Phoebe Bridgers stopped by the Paste studio on July 31 to perform a few tracks ahead of the release of her debut album, Stranger in the Alps. Bridges started off with “Georgia” from her 2015 EP Killer, then performed her two latest singles, “Smoke Signals” and “Motion Sickness.” Stranger in the Alps arrives on September 22.

Sessions: At Home with Phoebe Bridgers

Interviews and performances from your favorite artists don’t stop just because of the pandemic! So we bring you Sessions: At Home! For more exclusive videos subscribe to our page and check out Indie1023.org.

Phoebe Bridgers talks about her newest LP “Punisher” which is now nominated for the 2021 Grammys! What are some of the stories behind this prolific album? Bridgers details the stories and production behind the project. This is my favorite Amazon Basic device we use daily to warm up oatmeal, make tea, etc. The coolest feature is the auto-shut-off feature, close 2nd is the Electric blue glow it gets at night.