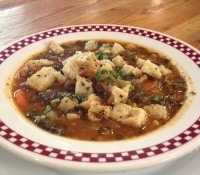 Pop’s Back Door Restaurant is not just delicious Pizza! Pop’s Back Door in Hope Valley Plaza with a Durham post office and Bull Street Gourmet Market on the other side (3710 Shannon Road Durham 27707).

This restaurant is close to my office, and I have enjoyed fresh pasta with marinara, delicious farmer’s market green salads, savory Lasagna, and personal 10″ pizzas. The atmosphere is family casual but appropriate for a quick business lunch. The proprietor/chef is on the premises most days and is very friendly and inviting. I highly recommend Pop’s Back Door South as a destination lunch or dinner location.

Jefe Lubiano has over 11 years of experience working in the restaurant industry. Chef Lubiano graduated in 2007 from the L’Academie de Cuisine in Gaithersburg, MD, earning his degree in Culinary Arts. Chef Lubiano is no stranger to the Durham area. He has worked at several well-known Durham area restaurants, including Pop’s Trattoria, Nana’s, Washington Duke Inn & Golf Club, and Four Square Restaurant. Chef Lubiano has also worked for Chef Jeffrey Buben at Bistro Bis & Vidalia in Washington, DC, and Chef Cindy Wolf & Tony Foreman at Cinghiale in Baltimore, MD.